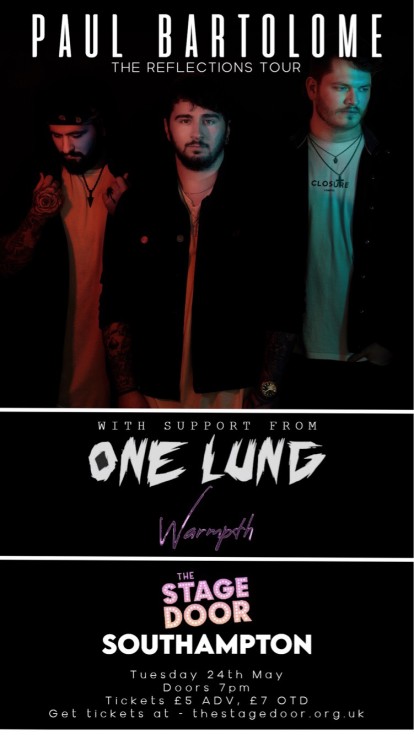 UK based artist Paul Bartolome and his band are currently in promotion of there upcoming album “Reflections” featuring there top 25 billboard charting single “Time Bomb (feat. Kellin Quinn)” and there single “Criminal (feat. Danny Worsnop)”! The album is set to drop later this year with “The Reflections Part.1” Ep dropping 3rd June!
This will be there first Tour since they supported “The Calling” across the Uk and Europe right before the pandemic hit and they will also be heading to America July 15th to headline stage 3 at “Inkcarceration Festival”!
Time Bomb (feat. Kellin Quinn) - Song Link
https://open.spotify.com/track/3dkETQc2IQN7e5ku5kRO33?si=gUSRfG8_S5SNM9LjtobIiw

Supported by One Lung Band and Warmpth

'We are ONE LUNG from the south coast of england. Taking energy and inspiration from punk scene over the years;with a strong importance on lyrics, heavy guitar,bass and drum riffs, ONE LUNG was formed. Consisting of Sam O'Callaghan on vocals, Matt Chapman on guitar, Seb Bond on bass and Dozey on drums.'