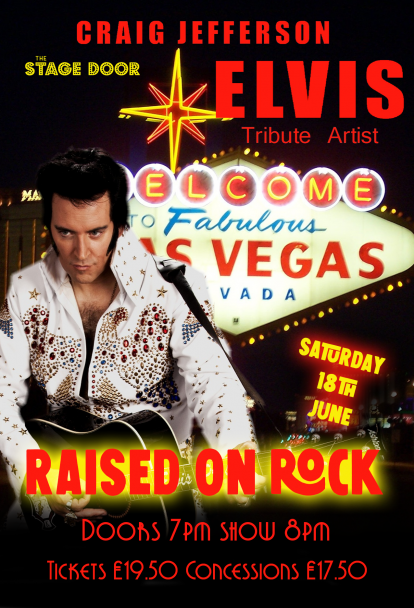 Craig Jefferson is making his debut appearance at The Stage Door in June with his Elvis show 'Elvis Raised on Rock featuring The Wonder of Elvis Band. Craig is one of the few Elvis Tributes who has been endorsed by Elvis.co.uk

Based in Hampshire UK Craig Jefferson can be booked worldwide, singing all music from across Elvis' career. Performing all of the greatest Elvis hits from the early hip swivelling Rock 'n' Roll through to the timeless classics in Vegas, he makes 'Elvis Raised on Rock' a one of a kind show not to be missed. Craig's passion for music is inspired by the king himself, this tribute truly captures the essence and illusion of the Elvis Experience.

Whether you're a long-time Elvis fan, or simply new to the magic of Elvis, there's no doubt that you will instantly recognise the uncanny vocal resemblance.