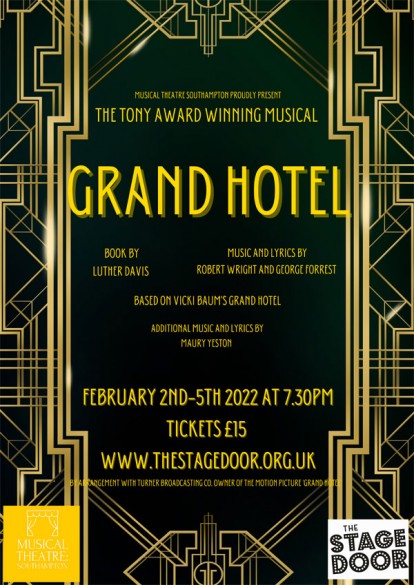 It's Berlin, bewteen the 2 great wars, and The Grand Hotel is bustling with eccentric and sometimes dubious guests: amongst them a fading prima ballerina being forced to dance again; a fatally ill Jewish bookkeeper who wants to spend his final days living in luxury; a young, handsome, but destitute Baron; a cynical doctor suffering from World War I wounds; an honest businessman going bad as he faces financial ruin and a typist dreaming of Hollywood stardom. Over the course of a weekend, their extraordinary stories interweave with each other and the hotel’s hardworking staff.

Award winning Musical Theatre Southampton return to The Stage Door following a SOLD OUT summer run of Soho Cinders, featuring a cast of 18 local performers and a stunning live band.

Based on Vicki Baum’s Grand Hotel, by arrangement with Turner Broadcasting Co. owner of the motion picture Grand Hotel.

Presented by arrangement with MTI Shows on behalf of Music Theatre International of New York.