The Stage Door > What's on > Solve-along-a-Murder-She-Wrote @ 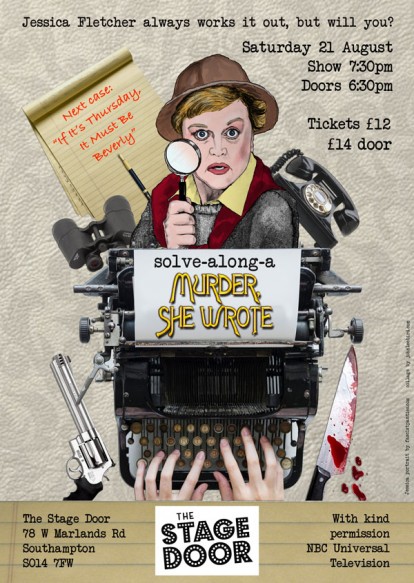 Pit your wits against JB Fletcher at Solve-Along-A-Murder-She-Wrote an interactive screening of a classic episode of Murder, She Wrote. Join us as Jessica gets caught up in a sex scandal at the Cabot Cove Salon, in "If It's Thursday, It Must Be Beverly".
Super-fan Tim Benzie returns to The Stage Door following packed presentations of the episodes "Broadway Malady", "Sing a Song of Murder", "Jessica Behind Bars" and "Birds of a Feather".
The night features games, prizes and audience participation, with special permission from NBC Universal Television.
Solve-Along-A-Murder-She-Wrote celebrates all things 80s television mysteries had to offer – contrived scenarios! No DNA evidence! Massive hair! Has-been guest stars!
And of course taking centre stage is film and Broadway star Angela Lansbury as novelist/detective JB Fletcher. Can you solve the crime before Cabot Cove’s best amateur sleuth?
Solve-Along-A-Murder-She-Wrote features:
* A race to solve to the crime, via the Fameometer and the Suspiciometer!
* A sing-along to the theme tune with new lyrics!
* A Cabot Cove quiz and raffle!
* Clips and biogs of the campy guest stars!
Tim Benzie is obsessed with Murder, She Wrote, having watched the original series when it was first broadcast, and now relishing the repeats on television everywhere. An award-winning playwright and co-writer of the Royal Vauxhall Tavern’s 2017, 2018, 2019 and 2020 pantos (‘Goosed’, ‘Rubbed’, ‘Slipped' and 'Pricked'). He is the co-producer of the camp club night PopHorror.
Time: Doors at 6:30pm
Show at 7:30pm
Tickets: £12 in advance
£14 on the door