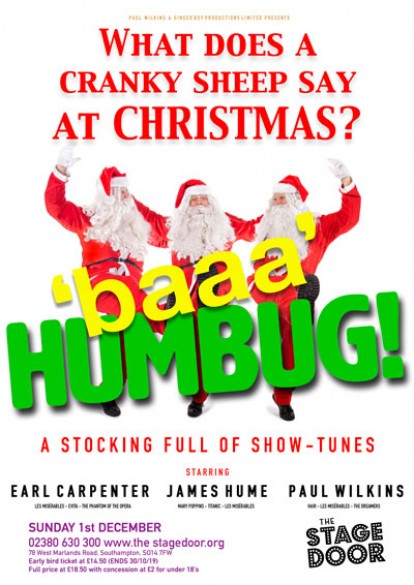 A STOCKING FULL OF SHOW-TUNES

Joined forces to sing songs, to pay for their dinners.

Their voices were tuneful and the banter was funny

Singing all of the show-tunes, for not that much money!

Come and join top International and West End musical theatre singers in a rather delightful and humorous evening of musical anecdotes, songs and much Christmas merriment, here at The Stage Door.

Southampton boy Earl Carpenter (Les Misérables, The Phantom of the Opera, We Will Rock You) joins forces with musical theatre chums, also from the SouthJames Hume(Mary Poppins, Titanic, Les Misérables) and Paul Wilkins (Hair, Les Misérables, The Dreamers) to sing numbers from many of your favourite musicals as well as a few festive ditties.

Bring the mistletoe and join the good cheer, for an evening that will definitely get you in the mood for Christmas.