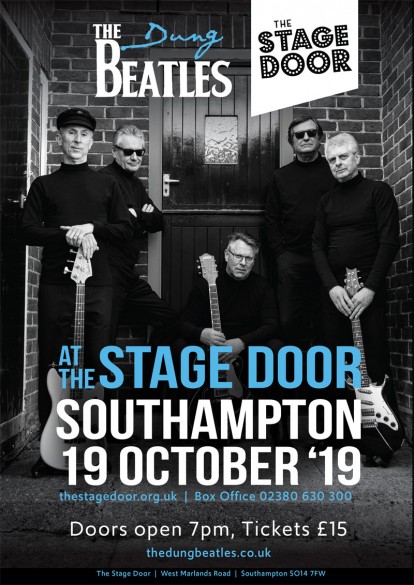 Hailed by The British Beatles Fan Club as “definitely not your average Beatles band”, The Dung Beatles have earned high praise for their authentic musical renditions and close-harmony vocals.

Based in Buckinghamshire, the band formed in 2013, with Danny Prendergast on lead guitar and vocal, Mike Ashton on drums, Steve Hillier on rhythm guitar and lead vocal, and Phil Toler on bass and vocals. Martin Kent joined in 2017 on keyboards.

Big fans themselves, the band perform a wide mix of classic hits and more obscure album tracks from every year of the Beatles' commercial success.

Previous highlights include playing live on Mike Naylor's BBC 3 Counties Radio show, gigging at The Cavern in Liverpool, and performing to over one thousand students at the Trinity Hall College Cambridge "Maramalade Skies" event on the same bill as Radio 1 DJ Annie Mac.

In March 2018 they performed to a full house at The Waterside Theatre, Aylesbury, along with pop legends John Otway, Howard Jones and Marillion, in support of the Friars Club tribute to David Bowie and the unveiling of his "Earthly Messenger" memorial statue in the town.

And now the band brings the show to Southampton to perform all these wonderful Beatles songs for you in the terrifically intimate setting that is The Stage Door.